In embedded application scenarios such as IOT and smart terminals, script development is a convenient and fast solution.

However, there are not many development boards that can be used directly in the development of micropython. It is obviously a huge project and a high threshold to transplant micropython for the MCU without ready-made micropython firmware.

Moreover, the operating efficiency of python is low, which is especially obvious in the MCU with limited resources. It is also difficult to make full use of the hardware features such as interrupt and dma of MCU for development with python.

In applications such as high real-time signal processing, data acquisition, and real-time control, it is difficult for python to be truly implemented in the production environment.

If the function of MCU can be called directly from the scripting language, the development difficulty will be significantly reduced.

Then, if you use the c language for MCU embedded development, and provide an object-oriented scripting language calling interface to the host computer or server, can you take into account the MCU operating efficiency and development efficiency?

The Pikasciprt library introduced in this article does exactly that.

1.1.2. The principle analysis of PikaScript

The schematic diagram of the architecture of PikaScript is shown in the following figure. We analyze it layer by layer from top to bottom. 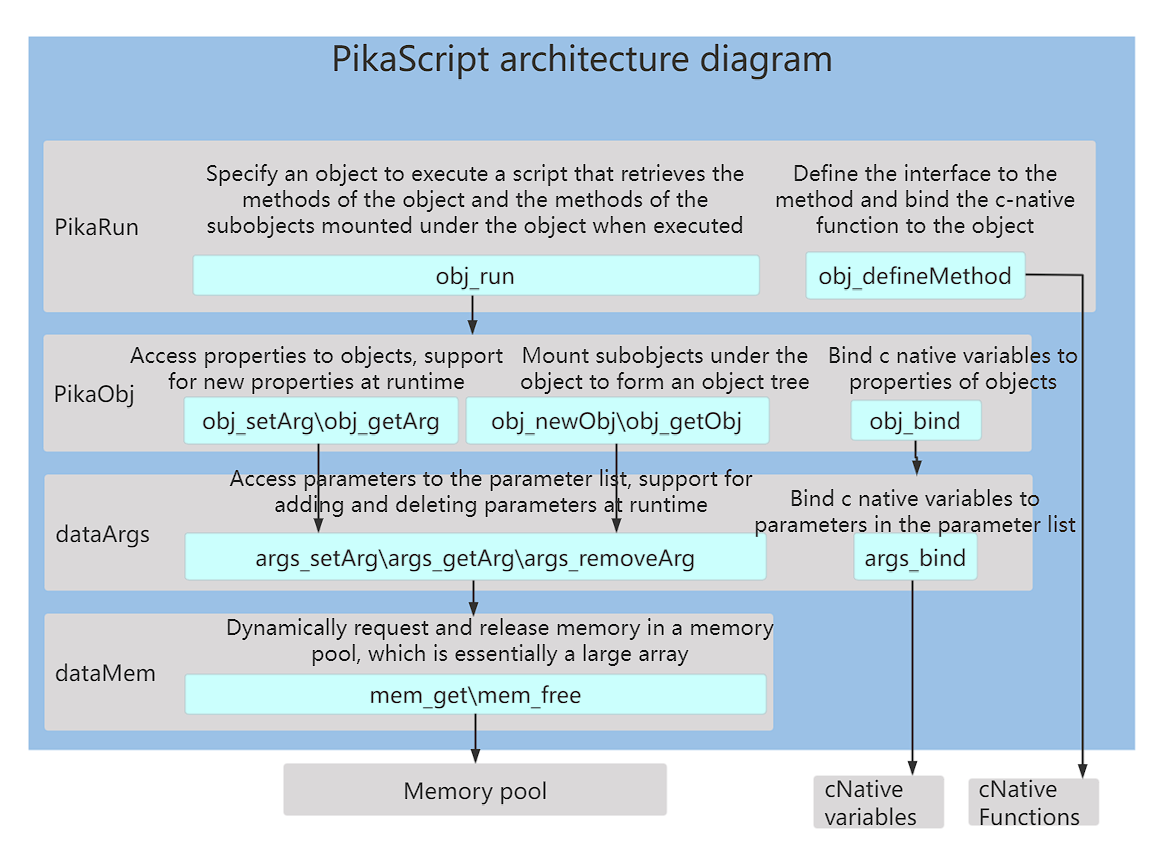 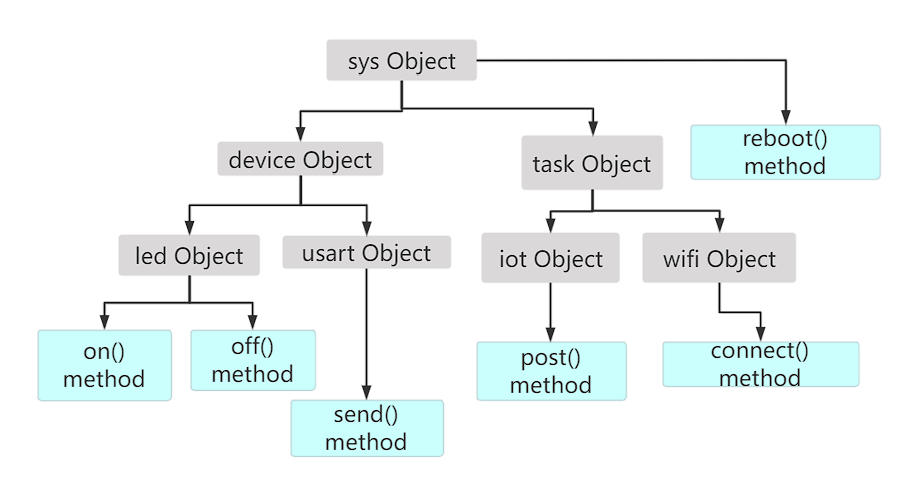 At this time, we only need to pass in the pointer of the top sys object in obj_run, and you can call all methods of all objects with the method shown in the following figure. Among them, the reboot() method directly belongs to the sys object, so it can be called by directly running obj_run(sys, "reboot()"), and the led object is called through obj_run(sys, "device.led. on()") to call. 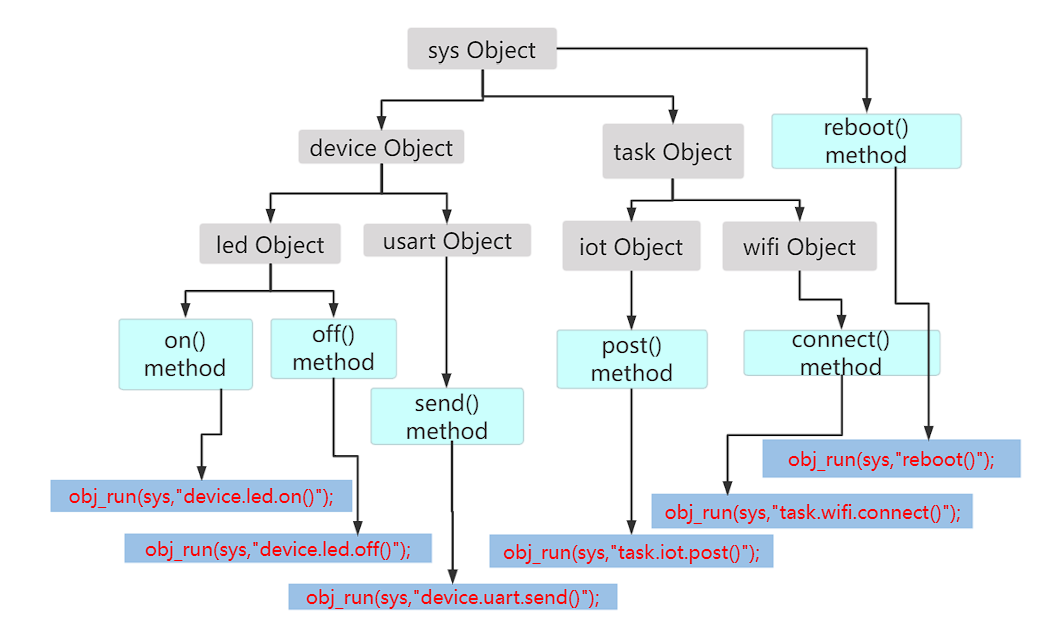 In actual development, we can let the mcu run the data received by the serial port directly as a script. E.g:

Where uartReceiveBuff is the data received by the serial port.

At this time, send "device.led.on()" to the serial port of the mcu, and the led light can be turned on.

As mentioned in the previous section, we already know how to use PikaScript to execute scripts within an existing object structure. So the next question is, how to construct objects, and how to define properties and methods for objects?

The entry parameter args is a parameter list. The args is internally based on a linked list, and any number and type of parameters can be passed in. Here args is the initialization parameter of the constructor, which will be used when constructing with parameters.

The return value of the constructor function is a PikaObj object.

The first line of the constructor is for class inheritance. The LED class inherits from the Pikaobj base class, which is the source of all classes.

obj_setInt defines a property for the LED class, the property name is "isOn", and the initial value is 0. 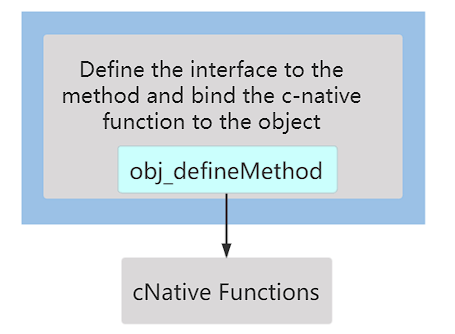 obj_defineMethod binds a method to the LED class, and the bound method is the on() method. onFun is a function pointer to the c native function to which the on() method is bound. The specific way of writing the onFun function is introduced in Chapters 3 and 4.

Generally, only one root object is constructed in a project. 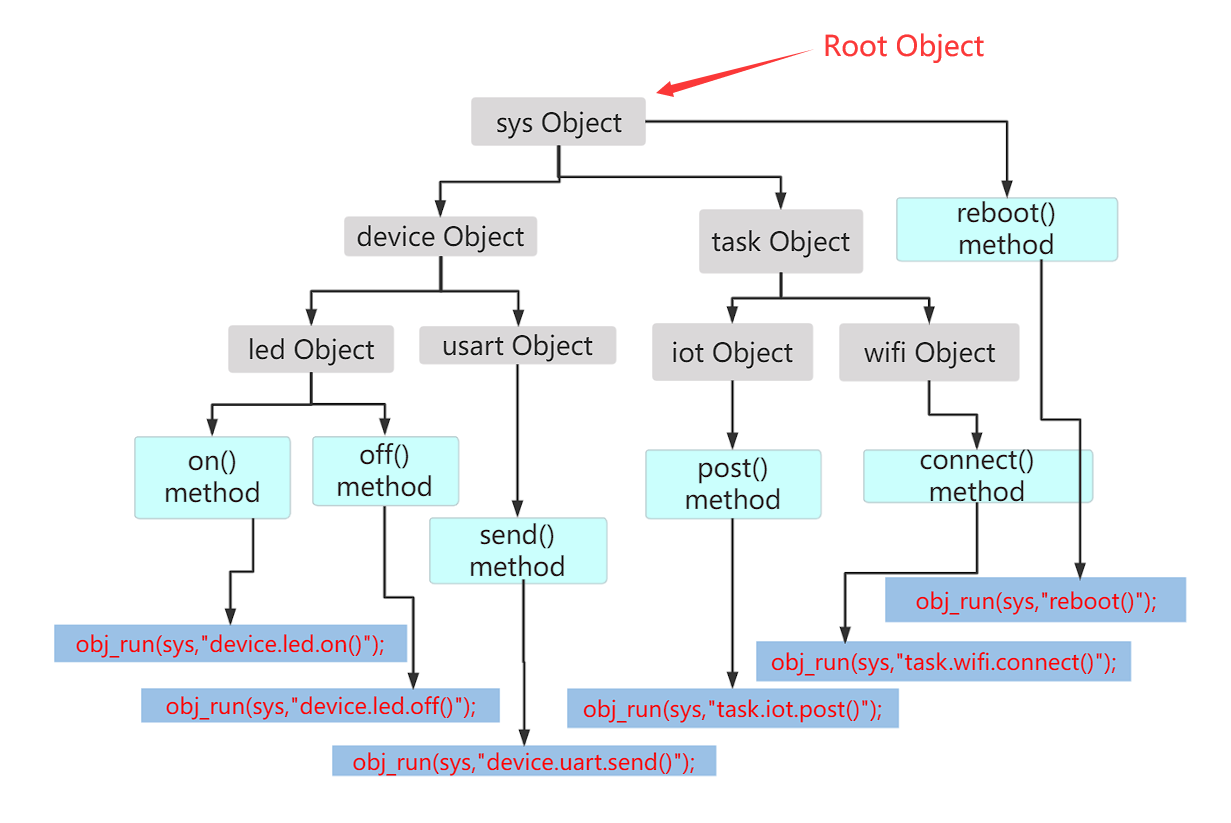 The construction of general objects is done in the constructor of the parent object. If you want to mount the led child object under the sys object, you can write the constructor function of the SYS class like this:

At this time, by calling the following function, you can get a sys root object that mounts the led object.

dataArgs is a dynamic parameter list based on a linked list. Its structure is Args. dataArgs dynamically applies for and releases memory at runtime, so you can add, delete, modify, check parameters at runtime, and attribute and method information of Pikaobj The access is based on the dataArgs parameter list.

The following example is the basic usage of Args. The implementation principle of dataArgs will be introduced in subsequent articles, and will not be emphasized in this article.

dataMemory provides dynamic memory allocation and release for dataArgs, which is not the focus of this article.

1.1.3. Light a light with PikaScript

Then let’s light a light and see how PikaScript provides object-oriented scripting support for mcu in actual projects.

Let’s take the HAL library of STM32 as an example. Suppose an LED light is connected to pin PA8, which we call led1. When PA8 is pulled high, the light is on, and when it is pulled low, the light is off.

Then to turn on the light led1, you need to use the following c language code:

Let’s see how to use PikaScript to achieve this requirement.

The entry parameters of the onFun() function are self and args, where self is the objectpointer, args is a list of incoming and outgoing arguments (used in Chapter 4).

In PikaScript, all functions bound as methods use these two entry parameters.

obj_defineMethod is used to bind the written C language function as the method of the script object.

Here, the function pointer of the native function onFun() of the C language is registered into the object as a parameter, and the "on()" string declares the method name and parameters when the script is called, here "on()" Methods have no parameters, and method binding with parameters is introduced in Chapter 4.

obj_import imports the LED1 class through the function pointer of the constructor.

obj_newObj creates a new led1 object through the imported LED1 class, and the led1 object is mounted as a sub-object under the MYROOT class.

1.1.3.4. Create a root object and listen for incoming data from the serial port. When the entire row of data is obtained, it is directly executed as a script.

At this time, just send led1.on() to the serial port of mcu, the light will be on (magic no~)

1.1.4. Implement an addition function in PikaScript.

Like the last onFun function, the function to be bound this time is the addFun function.

method_returnInt is used to pass the return value of the method, and it can also return float type, string type and pointer type.

1.1.4.2. Define the constructor of the test class

This time use obj_defineMethod to bind a method with input and output parameters.

"add(val1:int,val2:int)->int" is python’s typed function declaration syntax, indicating that the add method has two input parameters, val1 and val2 of type int, and the output The parameter is also of type int. Likewise, pass a function pointer to the addFun function.

Mount the test child object in the root object.

After obj_run runs the script, it will dynamically create a res property, which belongs to the root object.

obj_deinit is used to destroy the object, all child objects mounted under the root object will be automatically destroyed.