3.1.1. How to choose a platform that can run pikascript

In this document, we will describe how to deploy PikaScript for new platforms.

PikaScript has almost no global variables and macros, and only depends on the standard library, so it is very easy to deploy PikaScript for new platforms.

Here are the specific steps to deploy PikaScript

Your template project just needs to include a serial port initialization that supports printf, and then you can happily use pikascript.

The usual script interpreters rely on the operating system and file system, and pikascript does not need these, if you have deployed other scripting engines, you will find that PikaScrip has real super Lightweight features.

To get PikaScsript, you can use the pika package manager (option 1), or use the project generator on the official website (option 2).

Option 2 is an automated version of Option 1. It is recommended that newbies use Option 1 when deploying for the first time to familiarize themselves with the package manager.

PikaScript package manager can help you pull all source code and tools needed by pikascript, and provide version selection function, which is convenient for you to switch versions.

And the PikaScript package manager uses gitee source, which can be used smoothly in the mainland, does not require scientific Internet access.

Then open the project you want to deploy, create a new pikascript folder in the root directory of the project, and copy PikaPackage.exe into it.

Next, with the help of PikaPackage.exe, we can easily pull the source code and modules of the specified version.

Pull the source code and modules through a requestment.txt file.

If you are familiar with python’s pip package manager, you will find that the requestment.txt file format of pikascript is the same as that of pip.

Create a new requestment.txt file in the pikascript folder of the project, and write the following content.

You can copy the requestment.txt kernel and standard library version of stm32g070, which is an officially supported development board The version used by Pika Pie-Zero.

And all optional versions can be viewed in the packages.toml file.

The lts2021 version refers to the long-term support version released at the end of 2021, and the support period is within 2022.

The usual version number is v1.x.x, the lts2021 version is based on v1.3.5 with stability patches.

The pikascript folder now has two files, pikaPackage.exe and requestment.txt. Double-click to run pikaPackage.exe, and the source code and modules specified in requestmemt.txt will be pulled down.

After installation, the package manager will automatically lock the version and the requirement.txt will look like this

If you want to upgrade the version, modify the version number in requestment.txt and run pikaPackage.exe again, the original version will be overwritten.

After pulling the source code, the next step is to write the python script that pikascript runs.

We create a new main.py file in the pikascript folder.

Among them, import PikaStdLib means importing the standard library.

The standard library must be imported, even if it is not used directly, and print('hello PikaScript!') is used to test whether pikascript is started normally.

3.1.2.2.2. Option 2 Use the project generator on the official website 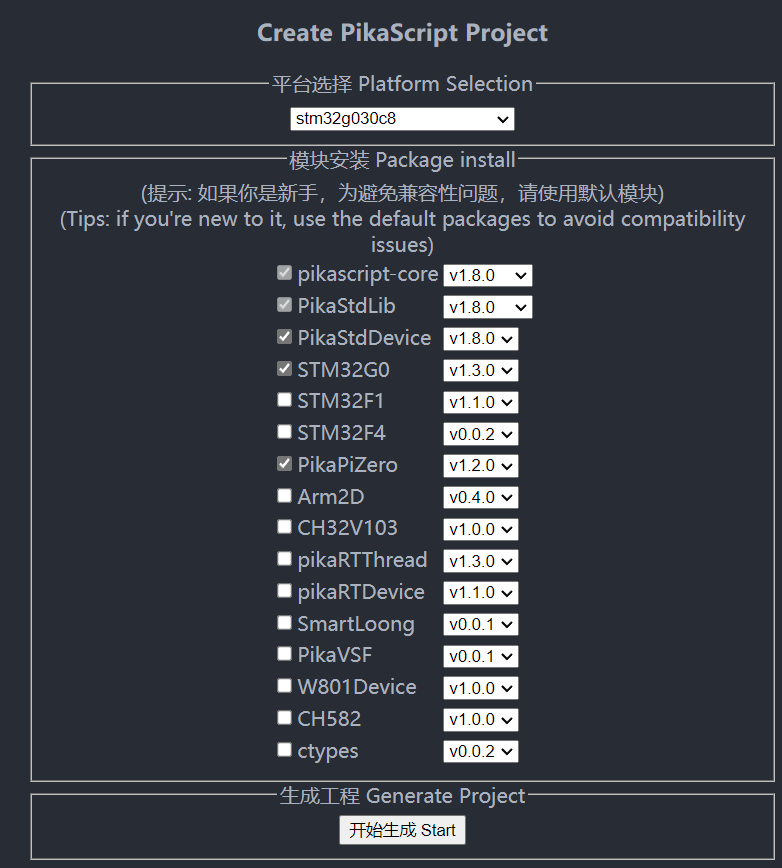 Select the template for the platform, and then click “Start Generation” to get the default reqeustment.txt, main.py, and pikaPackages.exe.

When the project is generated, the source code and tools are automatically packaged.

Next, run rust-msc-latest-win10.exe to precompile main.py and imported modules into pikascript api files.

The precompiled files are in the pikascript-api folder.

We open the pikascript-api folder and find that there are some .c and .h files in it, which means that the precompile is successful.

The pikascript precompiler can precompile C modules into .c and .h files.

Create three new groups in Project, it is recommended to name them pikascript-core, pikascript-api and pikascript-lib

Then add all the .c files in the three subfolders of the pikascript folder (including the subfolder in pikascript-lib) to the keil project (the actual number of .c files may not match the screenshot, just add them all.)

Open the project’s startup file, in stm32, this is a startup_stm32xxxx.s file, and on other platforms, you have to figure out how to adjust the stack yourself.

Add the startup code of PikaScript in the initialization code of main.c.

Add a startup code to the main function

ended? Yes, it’s over, it’s that simple, isn’t it amazing.

This is because the precompiler does a lot of auxiliary work behind the scenes, including the automatic generation of the pikaScriptInit() function.

When compiling the source code, you need to check the C99 standard, and the compilation optimization level can be selected arbitrarily, and pikascript supports it.

Then you can compile it directly. Generally speaking, it can be passed directly.

We sincerely appreciate your contribution, by contributing code, you can help PikaScript run on more platforms, and more developers will benefit from you.

PikaScript manages peripherals through packages. To add peripheral support to the platform, please refer to the following documents: